The first thing you’ll need to do is check out the instructions on using TypeScript in the Redux docs, they’re extremely well written and are our saving grace here, allowing us to get up-and-running quickly with a slightly verbose — but clean and type-safe — initial set-up.

We’ll only be writing a small application that toggles a single property in the store, but everything here gives you the toolset you need to expand upon and build a real-world application with. In fact, most of the code is taken directly from the new SuperHi Editor that I’ve been working on.

The first file is auth/types.ts, it’s very similar to the Redux docs on Type Checking Actions & Action Creators but deviates with the use of immutable.js, we’re using Immutable in the SuperHi Editor because it’s noticeably faster than working with large JavaScript objects. The Redux docs on Using Immutable.JS with Redux are again a good starting point but we’re ignoring their best practices — such as using a Higher order Component to convert Immutable objects to JS objects — in the name of speed, everything is an Immutable object — typically Records — and we’ll work with them directly.

First we set up the plain object — or “props” — for the state:

Then we create the initial state given the default props:

And then we build a class that extends this Record, allowing us to build records with new AuthState(props):

Typically in this class we’d also want to add the props — in this case there’s just one: public readonly status!: AuthStatus — but if you’re using create-react-app — as we do in the SuperHi Editor — then you’re compiling your TypeScript with Babel, not with TypeScript itself and this will lead to a runtime error of Cannot set on an immutable record.

This is really simple and — for now! — exactly the same as the Redux docs. We’ll come back to actions when we implement thunk actions later.

Pretty similar here too, though we build an initialState with our AuthState Record and export it for later. Because we’re using AuthActionTypes here TypeScript will know exactly what payload to expect with each case, although in our demo it’ll always be empty.

We’ll also add auth/selectors.ts so we can grab that status as needed:

We can use createSelector here as authStatus is going to be a standard JS string but if we instead wanted to select the entire auth slice of the store we’d need to do:

This allows us to use Immutable’s is function to compare two immutable objects — in this case the previous auth state and the new auth state — guaranteeing whether or not they’re the same and making sure we don’t re-render the React app accidentally.

Our root reducers.ts file is where things get a little messy:

The first thing we do is set up AppState just as we did with AuthState, using the initialAuthState we defined in auth/reducers.ts

We export a union of all action types, this includes the AuthActionTypes — and as any other action types you might’ve used — as well as the special BatchAction type, allowing us to safely dispatch batchActions too. We also export a ThunkDispatch built up of the AppState, void — because we’re not using any extra arguments with redux-thunk — and AllActionTypes as well as ThunkAction built the same way, with void as the first type argument as we won’t be returning anything from our thunk actions.

Finally we build the rootReducer and then, because redux-immutable only allows us to use a Map here, we lie to TypeScript — and ourselves — and say this is actually a Reducer of AppState and AllActionTypes. This will give us type-checking for keys in the store even though in practice we don’t have these guarantees, the API for Immutable Maps and Records are very similar so we can get away with it here.

This looks pretty much as you’d expect, but wait, where did that middleware come from? We’ll have a look at how to use middleware with all of this:

It’s actually not too bad! We’re using our previously declared ThunkDispatch here to make sure we can dispatch on both normal actions and thunk actions. We could even set up a switch statement here and get the same level of safety we did in auth/reducers.ts. Note if you add your own special middleware-only actions you’re also going to want to set up middleware/types.ts and middleware/actions.ts files for these and add the actions to AllActionTypes in reducers.ts.

Speaking of auth, we’ll add a thunk action to auth/actions.ts:

We’ll use our ThunkAction here from reducers.ts to keep TypeScript happy, and if we use this in a component:

Here it’s again mostly the same as you’ll see in docs, the trick is using AppState and ThunkDispatch from our root reducer file in mapStateToProps and mapDispatchToProps, and ReturnType<typeof mapStateToProps> & ReturnType<typeof mapDispatchToProps> to get the actual shape of our props for the component. You can also extend Props if there’s any props being passed in from above. We’re also using our selector from auth/selectors.ts to make sure our data is memoised.

One final gotcha is if you’re importing your store in a file and using that directly — say you’re trying to do something right up top before you add your <Provider> wrapper — and dispatching a thunk action. Instead of store.dispatch(action()) you’ll want to do (store.dispatch as ThunkDispatch)(action()) so TypeScript knows what you’re trying to achieve here.

We’re also using Apollo in the SuperHi Editor and I considered adding detailed instructions on getting that set up as well, but in practice it depends on what you need. The easiest method is to throw out Redux and just use Apollo, but although Apollo gives you an internal cache it doesn’t have the tools — see above for the sheer number of them we’re using here! — for working on state like you would in Redux.

Instead, the solution we came up with was to implement Apollo as a Redux middleware which allows us to use Apollo’s client.watchQuery, client.mutate and client.queryManager.startGraphQLSubscription methods directly to talk to our API. It looks something like this:

And we’re done. If you’re interested in how this all comes together then sign up for a SuperHi course and use our Editor! 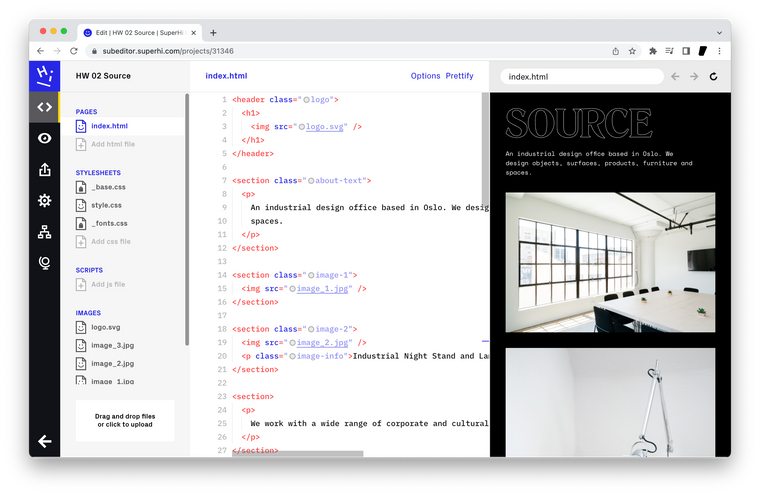